If I were to endorse any product in the universe, you can guess what that would be. Yup, the humble, sexy, playful set of two wheels that can give you a world-class aerobic work-out one moment and make you feel as free and giddy as a kid the next – the scooter. (If you’ve known me for more than 5 minutes, you know what I mean by a scooter and it’s not something with a motor.) So I couldn’t be more delighted to announce I have been appointed a Brand Ambassador of YEDOO Scooters and Balance Bikes presented by Weebikeshop.

When I went to Interbike to see the new Yedoo alloy scooters, I had very high expectations. I’m happy to report I loved them just as much as I’d hoped I would...actually, maybe even more!  They are beautiful to look at and I couldn’t believe how smoothly they roll – even on the carpeted floors of the Interbike convention hall.  Not only did I love giving the Dragstr, the Trexx, and the Wolfer multiple test spins around the hall, I loved seeing people who had never been on a Yedoo getting on one for the first time. I would always say, they will come back with a smile and they always did. I know these beautiful scooters will make a lot of people very, very happy. Congratulations to your entire company – with a special shout out to your brilliant engineers and designers as well as to your fantastic Yedoo team. I am delighted to be associated with such a fine product.

My Scooter Has Given Me Freedom

Holland got his first scooter eight years ago, and it was (what a surprise) a Mibo folder, a scooter made in the Czech Republic. He has been rolling the streets of Los Angeles on various brands of scooters ever since.

”It’s been great for my health – the first time in my life I’ve found an exercise I don’t even think of as exercise and that has agreed with my body over a long period of time.

In terms of lifestyle, riding a scooter has given me freedom. I quit driving in ‘92 and I’m fond of saying the world is now a safer place for everyone. I spent most of the 90s in New York where driving is neither expected nor required, but when I returned to Los Angeles in 2001 I found myself at the mercy of public transportation. Long waits. Unreliable schedules. Lack of service at night. Sardine packed buses on Sundays.

I enjoyed riding a bike for a while, but wasn’t confident on the streets, felt a little out of place on the sidewalks (although it is legal in most of Los Angeles city), and had recurring knee pain. When I read online about scooters , I was intrigued and decided to try one out for some short routes I traveled regularly. Before I knew it, it became my main source of transportation and the distances I was comfortable going continued to increase (and still does).

Without a Scooter We Would Never Have Made the Connection

Riding a scooter is like pushing a baby stroller or having a dog – strangers talk to you. Examples: “I love your…your…your…thing! I don’t know what to call it!” “Look, Mommy! A scooterbike!” “Do you change legs?” “Where did you get it?” “How much do they cost?” “Where’s the motor?” I AM the motor!

Spending so much time out and about not in a car really strengthens my connection to my community. I recently had a night that pretty much sums up all that I love about scooting around town. I rode a few miles to have dinner with a couple of friends. On my way home, a movie theatre is emptying, so I’m walking the bike and a guy coming out of the theatre says, “That’s a new scooter, isn’t it? That’s not the one you were riding before.” He stops to admire the scooter, figuring out how he’d add a suspension fork to make it more like his mountain bike (it could be done), lifts it, and expresses surprise at how light it is (it’s aluminum).

About a mile later I’m waiting at a light and a bicyclist comes up behind me and says, “You’re serious about that thing, aren’t you?” I have no idea what he’s talking about. He says he saw me ahead of him and thought, “Well, I’m going to pass this guy in a moment,” but he was behind me for a couple of blocks and didn’t catch up till the light. Maybe I’m faster than I think! We chat for a bit and continue up the block together and pass another guy on a bike who calls for me to stop. It turns out we were in the same episode of a show and he recognized me even though we didn’t have any scenes together and had never met. Now if we had both been in cars instead of on a bike and a scooter, we would never have made the connection.

My scooter has given me a chance to interact with so many great people.  I don’t want to make it sound like something happens every time I leave the house. Most of the time, I just go to an audition or pick up some kale and a can of beans and come home and that’s that.

Why a Scooter Instead of a Bike

People often ask why a scooter instead of a bike. First, let me state I love bicycles. I think they’re sleek, elegant, and extremely efficient and for going longer distances on human power, they can’t be beat. The appeal of a scooter for me is multi-faceted. It’s easier on my knees (when I have pain, recovery is pretty quick). As a full-body exercise, it’s helped my back a lot – every time you kick, your body pushes forward and gives your lower back a nice little stretch. It’s the right speed for me. Slower than a bicycle, faster than walking. (I should mention there are competitive enthusiasts who kick these things at speeds for which I’d need bionic implants to achieve.)

While more and more I ride on side streets and our increasing network of bike lines, I still do the majority of my riding on sidewalks and a scooter blends beautifully there. I can step on and off seamlessly to accommodate pedestrian traffic or just out of courtesy when I think I might make a frailer person uncomfortable. (I’m legal and by definition am considered “pedestrian”), but I do do my best to “share the walk.”

I guess the bottom line for me with the scooter is the fun factor. It not only gets me where I need to go, it makes me happy. There’s something primitive and gleeful about lifting your leg high in the air and striking it down on the pavement. And gliding through space in an upright position is a bit heavenly – kind of like an angel in a low budget cartoon. Ultimately I think some people were born to pedal and some were born to kick and here’s to all of us!”

From an interview published on http://www.bikecommuters.com/2012/08/22/commuter-profile-holland-macfallister/ 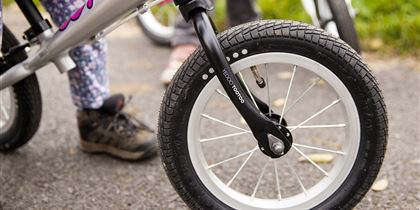 How to Assemble a Balance Bike? Don't Innovate!

Creativity and ingenuity are, generally, valued human characteristics, and not just the reserve of artists, scientists and designers. Creativity is a natural human need and can be applied to any everyday activity. However, it is not always appropriate.

Holland MacFallister was crowned Ambassador of Yedoo Brand for the USA at Interbike Fair held in Las Vegas Sept. 22.