THE PARTICIPANTS
Marek Jelínek - the father of the project, 33 years old, a renaissance man of versatile talent, graduated from secondary medical school, until this September worked as a manager at logistics company DHL. He gave up his position for his project How Far Can We Reach and became a full-time traveler. Marek is a great photographer, guitar player and singer. Being a skilled writer of lyrics  and music composer as well, he together with his band Mauritius released the album Litám (2006) and several singles with his second musical project Mimosféry. The project´s video was shot in kids´ homes. Mark´s photos from previous trips can be viewed at the Municipal Library in Kolín from 17 October to 17 November 2016.

The journey without return tickets

"Traveling gives me the chance to come to know distant lands, and also myself," says Marek Jelínek, initiator of the How Far Can We Reach expedition. This extraordinary scooter hike started on November 20 in the southern Mexican city of Cancun and will end sometime between May and July next year in Tierra del Fuego. "It was my dream to buy a single ticket, to adapt to the country's rhythm and to return home only after having arrived at our destination. "That´s why the route I planned is only approximate. We will be adapting it to the local situation and our condition.”

In addition, as part of the charity project Children belong to school, our team wants to attend classes and talk with local children about the importance of education. The photos, which we will take at schools, along with pictures that the children will paint, then will be auctioned off by the Czech non-profit organization WeCan. The returns will go toward the establishment of a new school for children in South America or in Cambodia.

Tomáš Kračmár - 24-year old electrician, who can fix everything and cannot stay long in one place. His desire to explore the unknown led to his decision to join Mark, whom he has long followed on FB. "The idea that in the morning I do not know what will happen after lunch, let alone in the evening is liberating for me."

Michal Kahoun: The biggest quality of this 28-year old supervisor of a cleaning company in London, who has just found himself at the crossroads of his life, is improvisation. "I liked Mark's project very much, especially the idea of doing something completely different than everyone else around me."

Lukáš Nekvasil: 25-year old fitter with European work experience has a sense of crisis management. He wants to know the culture and unspoilt nature of Latin America, has followed Mark on FB for long and then simply contacted him. "The greatest joy I get is that on our journey I can help someone."

Sayana Rampilova: 26-year au pair speaks many languages, apart from Spanish, she loves bananas and hopes that riding a scooter will help her to get rid of cellulite J. Being serious now - Sanny loves children, traveling, and Lukáš as well J.

How did it start

Marek Jelínek cannot deny his Latin American roots. Although he grew up in the Czech Republic in Kolín, he is pulled towards the sun and people who know how to enjoy life more than we Europeans do. This is also the reason why, soon after returning from his last tour (the fourth expedition), to Colombia, Brazil, Peru and Bolivia, he began to think of the next one. Using Google Maps he planned a route, he posted his idea on FB and the expedition was born. "I originally wanted to hitch a ride, but because it is safer to rely on ourselves being self-propelled, we switched to scooters. I am already looking forward to lending them to Indians in the Amazon.”

"South America is cheerful and colourful. Paradoxically, even though located in the West, it is not overwhelmed by the Western "from work to work" stereotype and behaviour based on fear." Undeterred by negative remarks like: What if you get robbed? Where will you sleep? You can´t make it, Marek quit his job, and keeps practicing every day, organizing and packing for his journey. "There's a lot to do, but it’s just part of  travelling. I trust that each of us can do what he likes and feels to be fulfilling," Marek explains.

This boy, who did not let others take away his dreams, and who shows others how to live a more joyful and happier life, has won over all of us in Yedoo with his enthusiasm. We donated his team Yedoo Trexx scooters and anxiously await how things will turn out. We also look forward to the photos, which Marek has a good eye for. With his picture taken from the salt plains of Bolivia he won a competition A Different Angle organized by Megapixel´s photo-server. Take a look at Mark´s FB profile, it's worth it.

Michala Pokorná: 26-year student of VŠO (Business University) abounds with excellent communication skills. She is attracted to getting to know different traditions, nature, new people and friends, who would provide her with a different worldview. Unfortunately, she can devote only a month of her time to the expedition. To keep the gender balance for her team, she decided to invite Káťa, who has already been preparing to go to South America for a long time.

Káťa Peukerová: being a travel agency employeé, she is the right person for the trip. "Mark has planned everything nicely, he has great experience with Latin America, I can´t imagine anyone better to go on such a journey with.  I can´t just sit at home, I love travel experiences too much and draw my energy from them for a long time afterwards."

If you like these daredevils, you can support them on the starter and get a royal reward – you can make your choice from nicely compiled packages. For more details, see: www.startovac.cz.

"The money we get this way will serve us as insurance for unforeseen situations, the rest we will use for various kinds of transportation that will be needed in places where there is no road," Marek explains. Lukáš, Sayana, Michal, Michala, Tomáš would welcome your tips and hints on scooter riding for they only started training in June. 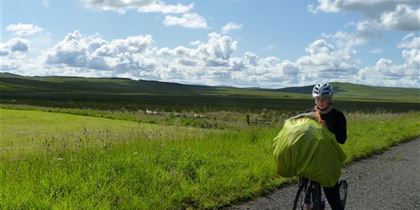 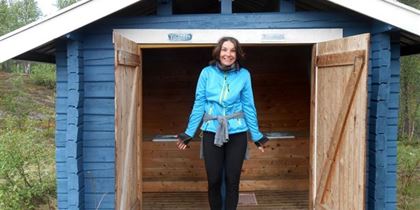 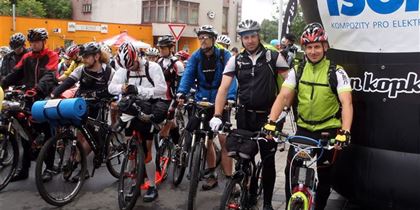 Marek Jelínek opening one of his photographic exhibitions.

"Deserts await us, this one is just in Peru, but don´t worry, among these sand piles there is a beautiful asphalt road," Marek says:))