During this year's motivational challenge, To Work by Bike, a record 10,789 people from 1,825 companies and 27 cities together relieved the atmosphere of 328 tonnes of carbon dioxide. This is the amount of CO2 that would have been produced if, instead of self-propelled riding, these people went to work by car. The best performance was from Martin Vašák from Brno, who managed a very respectable 2,922 kilometers (average 100 km per day).

"Riding regularly and efficiently are very important values, but, in the heat of chasing kilometers, we should not forget to take in our surroundings. In fact, beauty is everywhere to be seen on our roads." Vlasta Štochlová.

The women's category was dominated by Vlasta Štochlová from Prague, who not only cycled 2,190 kilometers during 22 days of the competition, but also managed to take between 2 and 4 photos during each of her rides, and later compiled them into an impressive photo gallery at www.dpnk2016. For this achievement she won the main prize in the nationwide category Creativity - a YEDOO City New scooter.

The Way to Work through the Eyes of Vlasta Štochlová

Vlasta´s site is inspiring. In her pictures, which she took mostly on the road between Prague and Pribram, we can see what we are missing out on because of our laziness.

We congratulate Vlasta and wish her many happy moments, whether on her bike or on her new YEDOO scooter, and wish all of us enough determination to persevere and ride, if not to work every day, then at least occasionally, for the joy of life :-). 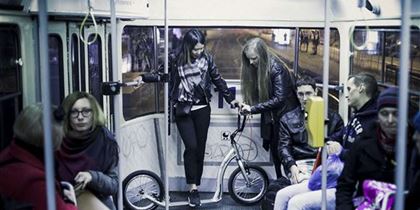 Traveling with Scooter in Public Transport Will Be More Comfortable

Traveling with scooter in Prague public transport will be again a little bit easier starting tomorrow. What changes? Newly you can travel with scooter in all subway cars, always on their first and last platform, except for the one right behind the driver. For better orientation, the car doors will be marked with labels. 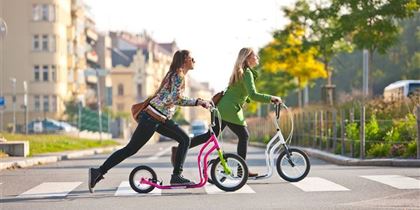 Riding a Scooter to Work. Join Us

Do you want to ride a scooter to work? Do you want to get in shape, mood and strengthen relationships with your colleagues? To contribute to cleaner air and more pleasant, safer and healthier cities? Join us and register for the national competition Biking to Work, which is being organized already for the sixth time this year by the association Auto*Mat. 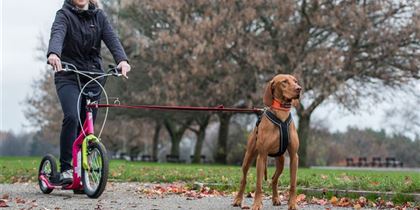 Have you got a dog that likes to move – but your usual walk is not enough to vent its energy? Do you find walking your pet boring or monotonous? Harness your dog to a scooter! At the end of the day you’ll both have fun and it might even turn into a new, absorbing hobby, as happened to Mr & Mrs Cipro.

Vlasta Štochlová from Prague (the blonde in the middle) takes the scooter YEDOO New City for winning the category CREATIVITY. The results were announced in Prague summer club Tiskárna na Vzduchu on June, 9.