Standa Král’s favourite destination is the south of France; he has been going to a holiday resort near the ancient town of Narbonne with his family for a number of years. “I love local cuisine, evenings with a glass of wine, the surrounding countryside, as well as sightseeing trips for the great number of places of interest,” Standa enumerates the reasons why every year, at the beginning of September, he travels almost 1,500 km by car to take a rest and relax, since he has a demanding job in a family company.

Nevertheless, the last year’s holidays were different. Not only did Standa take his parents to France, but he also took his employees and added a scooter for each of them in the van.

“Míťa, a friend of mine, who went to Narbonne with us the year before, hates lolling on a beach. He had been so worried about getting bored at the seaside, that he took a scooter with him. It turned out to be an excellent idea. We took the scooter not only to explore the surrounding area, but also to buy fresh baked pastry for breakfast and the holidays suddenly acquired a new dimension,” Standa explains.

Standa thus planned another stay in Narbonne in a similar style, however, this time with more people. A group of nine people comprising his family members and friends chose accommodation in the comfortable Eden Rock apartments near the beach, as every year. This was their starting point from where they could go sightseeing, swimming or go for entertainment.

The Region Of Southern France Has A Lot To Offer

The Narbonne Plage resort has an amazing atmosphere. French elite used to go there in the 1930s. A 5km-long sandy beach, which does not get crowded with tourists even during the main season, dominates the resort with picturesque villas and Mediterranean greenery.

Moreover, there are numerous vineyards in the surrounding countryside, some of them extend to the beach and you can have the local delicate wine poured right into a carboy in any of the many local shops. The seashore is lined with the limestone La Clape mountains offering not only tremendous views of the sea but also the opportunity to enjoy several kilometre-long ride on scooters.

It was Míťa who tried the approximately 5-kilometre-long ride down the La Clape hills last year and he was really excited about it. “This time all of us zoomed down, except for my grandma and my brother whose task was to get us up the hill in the van.” A group of people on scooters was a huge attraction for passers-by who were avidly taking photos of the riders and some people even stopped to talk to them.

Sightseeing Tour On A Scooter

“Trips on scooters, such as the mentioned downhill ride or the night trip along the coastline to the eight-kilometre-far lighthouse ranks among the highlights of the last year’s holidays,” says Standa and explains:

“There are high quality cycle routes along the resort with smooth asphalt. We comfortably rode 12 kilometres with children (10 and 13 years old) on one such route as far as the Gruissan fishing village. Its houses constructed from burnt clay bricks are located on the shore of a salt pond, where pink flamingos live.”

The ancient town of Narbonne, which was built by the Romans, is also worth visiting. It is located approximately 15 kilometres far from the sea and open-air markets take place there every year as well as gastronomic festivals are held there in September.

Grandma On An Electric Scooter

It was grandma Králová who enjoyed the holidays most! It was the first time the former enthusiastic sportswoman in her early 60s was on a seaside holiday and the first time she rode a scooter. She chose the electric scooter from the wide range of vehicles the Král family took with themselves. The others kept themselves fit in France on Yedoo Mezeq or Yedoo City scooters; the kids rode Yedoo Ox. Most of the scooters had been borrowed by Standa from the Yedoo rental shop in Prague.

A number of people have been infected with Standa’s enthusiasm. Although he has hardly any time for scooter riding during the work week since he is busy working, he tries to make up for it on weekends. Not only does he take his family for a ride, he also takes his friends and their acquaintances. For example, this year they are going to ride along the route of the famous Prague – Prčice march, visit the wine cellars in the region of Znojmo or explore another region of France, this time the picturesque Provence.

Yedoo wishes them a pleasant journey! 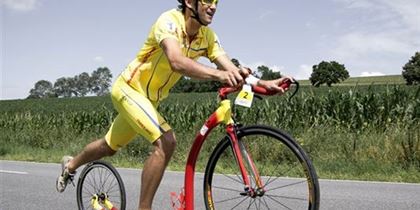 Why walk to the beach if you have a scooter to ride?

Let’s go on a trip after swimming!

Five-kilometre-long ride down the La Clape mountain belongs among the never-to-be-forgotten experiences from the holidays in Narbonne.

View of the sea from the La Clape mountain

The Archbishops’ Palace in Narbonne dates back to the 14th century; the adjacent Gothic cathedral which remains unfinished and the relic of the Roman series of underground hallways and tunnels Horreum used to store grain rank among the architectural jewels of Southern France.

The town-hall of Narbonne is worth seeing.

Refreshing ride between the fountains

Playing Kubbe on the beach, a throwing game, which demands precision, much like the French pétanque.

Stand on the way to Narbonne by the Pont du Gard aqueduct built in the period of the ancient Roman civilization.