*One of nine regions of Western Australia and also geologically the eldest territory on Earth.

On dirt roads, it could not be a matter of fighting

Listen to an interview, where Blandine was interviewed by reporters from the Australian NGAARDA MEDIA radio station: bit.ly/kicking-the-world-on-a-scooter.

Otherwise you found yourself quickly buried, witnessing your own dessication; creaky joints, eroded tendons, worn muscles. Skeleton and envy were inevitably trimmed. At the slightest sign of forcing through, you had to do the contrary, slow down, against all instincts, stay nearly still in the midst of the obstacle, develop a marathoner's patience.

One had to unfuse the technical hubris lying in the smallest device of measurement. In Kazakhstan, once upon a time of devilish wind, I had ended up covering up my speedometer, whose figures too widely under my average were breeding a growing sentiment of rage and frustration, leading the whole enterprise to failure. Only when I listened again to my sole body did I stave off that ill disposition to dominion, heavily fed by numbers.

Dirt roads were similar, you had to understand that you were not under your ordinary technical ability in extreme slowness, in order to find a paradoxical relaxation, somewhere between effort and progression. One was then not going against the road, rather going along with it, with the sand, with the rocks, with the corrugations, no matter the speed.

That respite of the accounting spirit was kin to a meditation where, in a being entirely focused towards a point of equilibrium, the temporal horizon ended up vanishing. A technocrat become geophile, one was reaching immobility in each action, for the fair movement espoused fairly the terrain, opening to an infinite iteration. Chronostasis happened. Motionless in time, moving through eternity. One could not do better and the road would unveil its rewards.

I have been working lately on a printed support to share the journey; I am happy to present the first Collector of "Ordinary tales of a round-the-world journey on a footbike". The adventure will thus also be written like an old-fashioned serial printed on newspaper, self-published.

Collectors are now on sale

"Ordinary tales of a round the world journey on a footbike", Vol.1 is available to order: limited and hand-numbered edition, coming in 100 prints on 60g newspaper, featuring a 12 page written piece (bilingual ENG/FR). ↣ latrottineuse.bigcartel.com (10€ + 2,60€ international delivery)

The bilingual edition, containing one written piece and pictures, will be limited, each copy will be hand-numbered, enough to build up a unique collection. Designed during my bivouacs, Volume 1, coming in 100 prints of 12 pages each, has gone to press and will be available soon!

If it is a success, the Tales should be published regularly, following the highlights of the adventure. The sales would help me fund the next issues as well as the journey, in the same non-lucrative spirit, every penny received being used for food, equipment, occasional nights under shelter, visas and communication expenses.

My feet are shouting hooray for new shoes! I have reached Newman, a mining town where I stocked up on food like never before (ouch the crazy weight...), and will spend two nights inside this box, coming with a shower, the first one I will get in weeks, such a luxury! If I allow myself some comfort and a short halt, it is because I am about to tackle hundreds of miles of desert dirt roads again zigzagging the "Golden Outback", across Gascoyne and Murchison regions*. Alright, first, on my way to tarnish the shower.

Haircut in the middle of nowhere

Who says you cannot get a haircut in the wild? This lady, a hairdresser, saw my messy, well, disastrous haircut, and offered to help me! Probably one of the most surreal moments of this crossing: getting my head shaved in the middle of nowhere on the side of a dirt road, on a chair please! 😍😁 Oh, and they gave me baked cinnamon fruits, heaven after running on oats and nuts for days...

Send me a letter

Sometimes you ask where to send a letter to me. In Australia it is going to be easier, as I have a sister living in Sydney who will forward the mail. Would be a real pleasure to discover your words on paper :)
Blandine Barthélemy, 809/150 Pacific Highway, North Sydney, 2060, New South Wales, Australia. 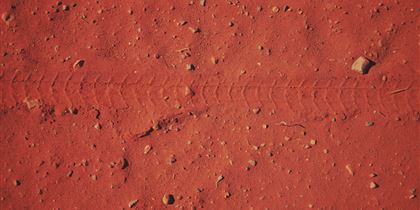 Three and half years of kicking and living on the Road throughout Eurasia had led Blandine to the gates of Australia. She had spent the last months running against the clock on main roads across burning, humid and overpopulated South East Asia, circumstances which she found were not allowing for a proper experiment of the simple good life. Leaf through her travel log with us and take a look at how she is doing on remote Australian trails.

Three years have passed since she rode her first mile on the scooter. About 1095 days and 43,588 kilometres later, Blandine is somewhere in Thailand, behind her the snowy saddles of Pamir, the desiccating Taklamakan desert of China, the Tibetan plateau and the rich rainforests of Laos and Vietnam.